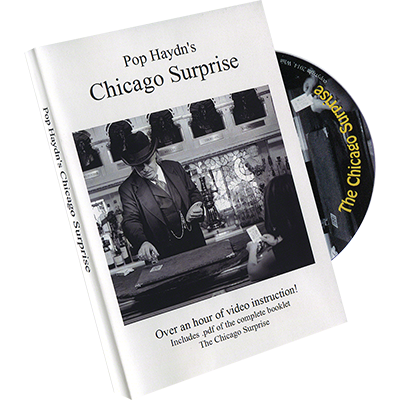 This is the all new DVD on Pop Haydn's wonderful routine, The Chicago Surprise. It contains over an hour of detailed instructions on the handling and presentation of this classic, and two live performances of the routine at The Magic Castle.This is one of the strongest card tricks you can do -- It is the opening routine for many fine performers, and has been used by such luminaries as Aaron Fischer, Reed McClintock, Doc Eason, Bob Sheets, and many others. It really confounds the spectators and establishes you right away as a wonder worker and not just a finger-flinging show-off."If I have only one shot at someone -- a CEO, director, or other important client, this is the trick i would do. When being interview for a job consulting on a Norman Jewison movie, Bogus, staring Whoopie Goldberg and Gerard Depardieu, I did this effect for Mr. Jewison. It was enough to get me hired."~ Pop HaydnAlso, included on the DVD is a pdf of the original manuscript of the routine. This classic booklet not only explains the entire routine, and contains the complete patter and presentation of the routine, but also contains some of the best and most thought-provoking writing on the philosophy of magic."The Chicago Surprise meets all my criteria for what a superior magic product should be: 1) an audience-tested, professional-caliber routine, 2) well written, 3) both handling and theoretical information (in other words, the how and the why) are included. Many professionals use Whit's routine. I'm sure you're going to want to as well."~ Michael Close, MAGIC Magazine"This entire manuscript is a marvelous piece of work, and if it does not cause you much thought about magic, then something is terribly wrong."~ Jamy Ian Swiss, Genii MagazineOn This DVD, you also are taught Eddie Fletcher's "I've Got A Surprise for You!" and Eddie's wonderful Toss-Change,/I> move. This video is a master course in magic and routining.