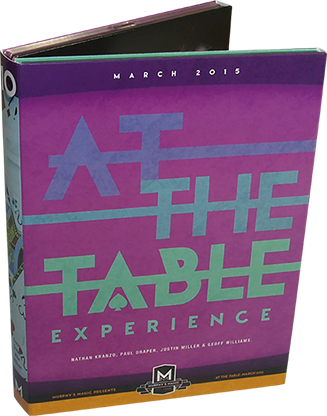 Beschrijving Beoordelingen 0
Beschrijving
The AT THE TABLE EXPERIENCE is back and March promises a something very special for everyone!...meer
Menu sluiten
Productinformatie "At the Table Live Lecture March 2015 (4 DVD set)"

The AT THE TABLE EXPERIENCE is back and March promises a something very special for everyone! Whether you specialize in close-up, stage, parlor, street, or mentalism we have you covered! Learn from some of the best magic has to offer! This month: Nathan Kranzo, Paul Draper, Justin Miller and Geoff Williams!Nathan Kranzo: Nathan Kranzo is a true worker in magic. Having honed his skills working resorts and going on tour, he went on to consult for Penn and Teller among others, and has had his work published in Magic Magazine, Genii Magazine, The Linking Ring and many more. In this At The Table Experience Nathan will teach you material that is tried and tested. Magic that has been worked and perfected over long periods of time. Fun, reputation making and fooling - Nathan brings it all! Paul Draper: Paul Draper is one of the hardest working mentalists and magicians we know. An anthropologist, magician and mentalist all in one, Paul has traveled the world performing, lecturing and spreading his knowledge of these arts, even having had the honors of performing at the world famous Magic Castle. Paul has appeared on TV on several occasions and won the Merlin Award in 2014 for Best Corporate Performer. In this AT THE TABLE EXPERIENCE, Paul will be performing and explaining pieces of both magic and mentalism. He will also be discussing the limitations of mentalism, how to create a character and much more. We welcome you as we step inside the mind of Paul Draper! Justin Miller: Justin Miller. Magic creator extraordinaire, and world-class sleight-of-hand artist. Hot off SyFy's hit TV show Wizard Wars, Justin joins us At The Table for something unique as he plans to take all of the effects he will be teaching, and perform them for a live audience prior to this event. He will then break down every performance as he goes over what worked, what didn't work and what could have be done differently - invaluable advice from anyone looking to improve their own magic and audience management! There will be magic ranging from never before published effects like VooDoo NoDude, which involves PK touches, fire and a bit of insanity, to updated handlings of things like Justin's ever popular Freedom Pack. A special event that should not be missed! Geoff Williams: Geoff Williams - Comedy, conjuring and creativity all in one! Having won more than two dozen awards, Geoff is as amazing as he is funny. He has lectured and performed in more countries than most have visited, and has fine-tuned his material to perfection over the course of three decades. From cards to coins, bottles and movie tickets, Geoff will be bringing a bit of everything for this At The Table Experience that is sure to be full of great magic!