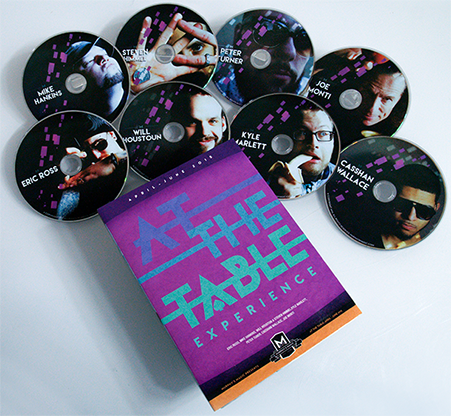 April brings us magic's bad-boy and creator of multiple best-selling effects, Eric Ross, plus funny man and knuckle buster, Mike Hankins. This month's magicians bring enough material to set you up for any occasion, whether you need some of Steven Himmel's razzle-dazzle in your walk-around, or are looking to brush up on the history and psychology of magic with master consultant, Will Houstoun; they're bound to appease the appetite of your magical education. The month of May sees Kyle Marlett elaborating on his experience creating magic for the biggest names in the business. Known amongst creators as the consultant to the stars, Kyle showcases some never before-seen effects at this very special At the Table Experience. Learn cool, visual and organic magic, plus receive exclusive insight from one of magic's rising professional consultants. Next, Peter Turner, the man, the myth, the legend himself, joins us for an unforgettable lecture. Peter is currently consulting on countless TV shows across the world, applying his highly sought after mentalist mind to some of the world's biggest stages. Peter is known for his bold approach to mentalism, which has left nearly all of his commercial material sold out within hours of release. From gritty street performances to completely baffling mind reading, we've got you covered! Don't miss out on one of the most anticipated lectures of the year. First up in June is rising star Casshan Wallace, one of the most creative young minds in magic today. Casshan reveals an incredible array of organic, visual and memorable magic whilst At the Table. He is well known for his killer effect, Melting Point, which has received rave reviews, but what most people are starting to find out is that this guy is no one trick pony. He's an active Youtuber where he posts videos of himself creating one magic trick per day, and even a series where he creates one trick per hour for 24 hours! Casshan has also performed along industry greats on the hit show Wizard Wars. Finally, At the Table presents a name that has resonated throughout the industry for well over 25 years. Joe Monti is a stellar magician and one of magic's most valuable consultants whose experience includes being the head consultant for Criss Angel's 'Mindfreak'. Joe has performed for clients in 40 countries across the world, over 300 colleges, and hundreds of fortune 500 events; this guy is a true 'worker'. These two lectures will leave you buzzing with new ideas.