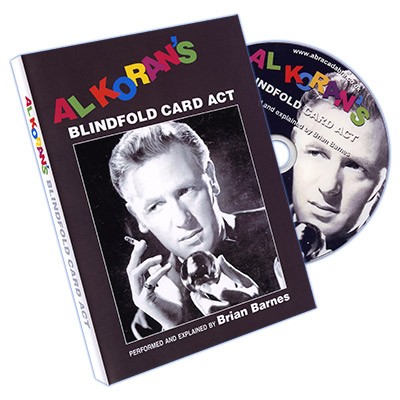 More than twenty years ago I had the chance to be at the Magic Circle and watched Brian Barnes performing Al Koran's Miracle Blindfold Card Act. I had not a clue as to what methods were being used and there was not a doubt that Brian Barnes was completely blindfolded and genuinely could not see. The evening at the Magic Circle was a special one and was for The Close Up Magician of the Year. Brian Barnes wanted to join the Magic Circle so they allowed him to perform this act for his examination. His performance was so immaculate that he was granted his membership of the Magic Circle and what he didn't realise was that he also won the Close Up Award as well. How often do we see some magic and remember it for nearly a quarter of a century. Not often for sure but this performance stuck in my mind and is still there. Immaculate, well timed and a work of art in reality. I persuaded Brian to allow me to film him for what is about to become a series of DVDs on the Magic of Al Koran and I got in a small audience of neighbours and we filmed away. I am really very proud of the DVD which has been beautifully filmed by magician Alex Whitwell who also happens to be a lecturer in video-making and film studies. He and another editor put in the finishing touches and I am just awaiting approval from Brian Barnes for the DVD wrapper design and we will start to release the DVD once that has been received. The explanation for the performance and method is in my recent release Al Koran's Legacy but as Brian Barnes has been performing this act for around 50 years he has taken bits of the routine out and has added some of his own subtle touches. If I ever decided to be a full time magical entertainer this is the act that I would want to feature. It just requires the minimum of props including a blindfold, cards and a table. It can be worked absolutely surrounded and for audiences of virtually any size. Brian Barnes not only performs the act in front of an audience of twelve but then explains how to perform it in detail. At times Brian was advised by David Berglas and those little extra touches from David Berglas can be seen. The blindfold is genuine and the magician can not see. No sleight of hand is required at all. The act culminates in the performer telling one assistant exactly how many cards she cut off from the deck and on turning to the other assistant who has taken a small quantity of cards from the deck he is able to call out the names of each card she holds. This is preceded by the two assistants taking a card each and then mixing the cards yet each time the performer finds the chosen card and you must remember he can not see the cards at all. If you are seeking magical perfection then all I can say that this is it. This isn't a hot dvd from some unknown youngster with a load of high end sound effects and an effect that doesn't even deserve to be in a magazine as so many new magical DVDs seem to be but is a solid demonstration of one of the finest acts you could ever learn and perform. Running Time: Approximately 57min