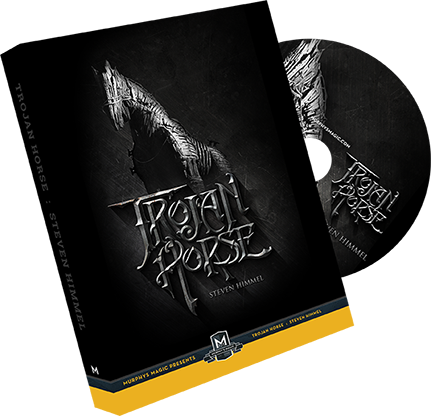 The Trojan Horse is a genius utility playing card gimmick that will allow you to:

Place a selection, very fairly, in between the two jokers. And with no funny moves the card vanishes only to reappear anywhere you want.

The Cargo:
1) Horse of a Different Color (color changing back)
A red card is selected and placed between the jokers. In an instant with no moves, the selection vanishes and reappears face up in the deck. It is placed once more in between the jokers and with a wave of the hand, the back changes color.

2) A Horse with No Name (Mystery Card)
An unknown card is place between the two jokers. A card is chosen and signed then lost in the deck. The jokers are picked up and the card between them is shown to be the signed selection.

3) Wells Fargo (Card to Coin Production)
A blank card is shown front and back. The spectator draws a picture of a coin, like a quarter or half dollar, on the blank card. The Jokers are introduced as money makers. The card with the drawing on it is placed in between the jokers, and with a magical wave, a coin slides out from the jokers and the card with the drawing has vanished.

4) Horse Whisperer (Thought of Card Sandwich)
The spectator peaks at a card. The deck is shuffled and the jokers are removed. The jokers are waved over the deck and a card is seen to appear in between them. It is the peaked at card.

With something as simple as one gimmick you'll have an infinite number of tricks at the ready. Saddle up and prepare for the Trojan Horse.