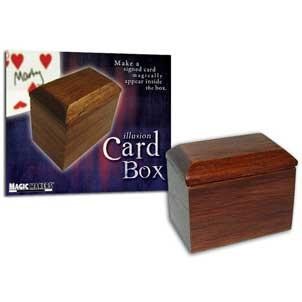 This prop has a long history:Most people associate this trick to the late great Fred Kapps who used a ring box into which a folded duplicate card was glued. This was one of the highlights of his lecture, where he made it clear that the method used had been shown to him by a German magician named Bruno Hennig. Mr. Kapps had shown it to his good friend Scotty York, who had modified the prop to allow a rattle of the card in a box before revealing it. It was Scotty York who later developed some of the best handlings and presentations of his prop. Later variations were put out by Jamy Ian Swiss, Italian magician Bruno Canaldi, and in 1985 an 8 page section by Tommy Wonder in his excellent Books of Wonder vol. 1, as the Card in the Ringbox. Wild Magic had made a series of these boxes, one for cards, one for money and one for blank billets. Models have appeared from England, France, Germany and various manufacturers here in the states.The Ultimate Card Illusion of making a signed card magically appear inside the box.The box measures 2.38 x 1.94 x 1.50 inches(6 x 4.9 x 3.8 cm).