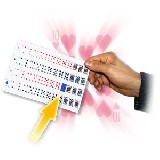 Description Evaluations 0
Description
Just that ultimate - Big The magician shows an envelope and tells the audience that it... more
Close menu
Product information "Just that ultimate - Big"
Just that ultimate - Big
The magician shows an envelope and tells the audience that it contains a prediction. He then asks a spectator to select a card from a deck, and to not show him. Next the magician picks up the envelope and pulls out a jumbo face down card saying that on it there is the chosen card. He turns it over and… there are all the 52 cards of the deck printed on it! The audience will start laughing understanding that the magician is joking. As soon as the spectator names his card though, the magician rubs his fingers on the printed prediction, and one card turns face down… it is exactly the chosen one! In fact its face is now visible on the other side of the prediction card. The audience will stop laughing and start clapping!
First a funny gag then… amazing magic!
Related links to "Just that ultimate - Big"
Evaluations 0
Read, write and discuss reviews... more
Close menu
Customer evaluation for "Just that ultimate - Big"
Write an evaluation
Evaluations will be activated after verification.
Customers also bought Customers also viewed
Customers also bought
Customers also viewed
Viewed
This website uses cookies, which are necessary for the technical operation of the website and are always set. Other cookies, which increase the usability of this website, serve for direct advertising or simplify interaction with other websites and social networks, will only be used with your consent.
Decline Accept all Configure