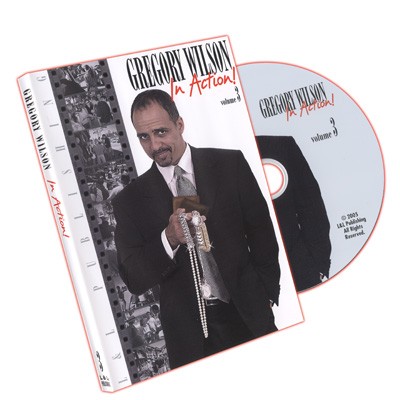 Time Card - tidy technique for telling time with a deck of cards. The Slot Machine Scam - A secret way to scam, sham and flim-flam a real slot machine for a real jackpot! You'll immediately book the next flight to Vegas after watching this. Chip on Shoulder -An appearing and disappearing casino chip-with a very surprising Apollo Robbins finish. See title.Throat -impressive demonstration to find all four Aces with a casino cut card.Greg has used this on a number of TV talk shows. Foreign Affair - Each time you fold a one dollar bill, it changes into another country's currency-from a Pound to a Euro to a Ruble to a Yen-and finally into a perfectly examinable hundred dollar bill!Plus:Garret Thomas' The Ring Thing Son of a Switch Stunt Double Bounce No-Bounce King-Size Travelers AND bonus footage of Greg's 20-minute (performance-only) stand-up comedy magic show from a top casino-resort in Lake Tahoe. These discs are JAM-PACKED with engaging and entertaining gems. No fluff. No filler. No fodder. Almost six hours of freak-out footage!With snow-capped mountains and plush pine trees as the new L&L backdrop, you'll see people laughing, screaming, losing their breath and simply staring into space from pure astonishment-and that's just from the striking lake view. Greg's magic isn't so bad either. Some of the bonus footage was shot in studio but most of it was filmed outside for real people around the spectacularly stunning Lake Tahoe area. It looks and feels like a street magic TV special. In other words, Gregory Wilson IN ACTION!Running Time Approximately 1hr 46min