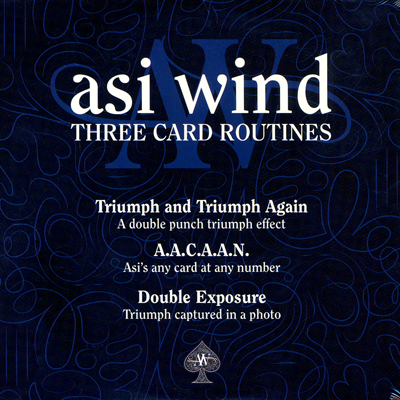 Triumph and Triumph AgainA double punch triumph effect. One of the best plots in card magic with a surprising twist. Two handlings are explained, and only an ordinary deck of cards is necessary. Pefect for walk-around and a formal close-up performance. "Stunning. Stunning." - Jason Alexander Running time: 33min A.A.C.A.A.N.Asi's any card at any number. Constructed from years of trial and error, Asi's Any Card at Any Number is a masterpiece of modern-day magic. The effect is suitable for both close-up and stage with a method that is nearly impossible to reconstruct. It can be performed surrounded and may be repeated with no additional setup required. Only an ordinary deck of cards is used. Nothing else. "You fooled me badly. This is by far the best A.C.A.A.N I have seen."- Johnny Thompson Running time: 41min Double ExposureTriumph captured in a photo. A mind-blowing new take on a classic effect. Double Exposure by Asi Wind is a reality altering version of Triumph that happens within a borrowed camera. There are no gimmicks or special applications needed. 100% impromptu. Just you, a deck of cards, and a borrowed camera are all that's necessary. Performed by David Blaine on national television. Running time: 23min