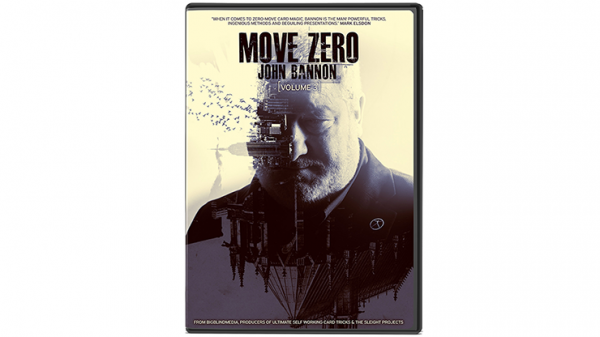 "This will lead you to rethink what "self-working" really means."
- Lance Pierce

Move Zero III is a veritable treasure trove of killer routines, none of which require any sleight of hand. Not a single sleight in sight, yet you will be devastating audiences with tricks that appear to show the greatest skill imaginable.

From the insanely clever 'Thirty Second Sense' (whose method is as elegant as it is in explicable) to the stone cold classic 'Origami Prediction', the nine featured routines provide an almost comical level of 'bang for your buck' in terms of ease of performance compared to impact on your audience.

And beyond the incredible nine magic tricks featured, Move Zero III will also empower you with five mind-bending techniques that you can employ in other self-working routines. These 'trickbag' lessons are genuinely invaluable - demonstrating just why John Bannon is held in such high regard by his peers. Master these and you'll be able to fool ANYONE.

Crucially, Bannon also shows you how to intelligently mix these techniques together to create sleight-free tricks whose methods are truly unfathomable. Never again will you see self-working tricks as cute, throw away magic for children.

Move Zero III - a masterclass in the art of the self-working card trick.