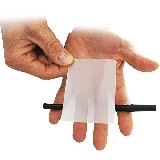 Description Evaluations 0
Description
The magician puts a pen on the outstretched fingertips of a spectator, and covers it with a... more
Close menu
Product information "Pen Twister - Verdrehter Stift"

• The transparent card is the size of a credit card, and can easily be slipped into your wallet.
• You can disappear the center of any pen (it can even be borrowed). To twist the center of the pen, you should use the special pen supplied.

Related links to "Pen Twister - Verdrehter Stift"
Evaluations 0
Read, write and discuss reviews... more
Close menu
Customer evaluation for "Pen Twister - Verdrehter Stift"
Write an evaluation
Evaluations will be activated after verification.
Customers also bought Customers also viewed
Customers also bought
Customers also viewed
Mouse to watermelon - Maus zu Wassermelone
£ 17.20 *
Viewed
This website uses cookies, which are necessary for the technical operation of the website and are always set. Other cookies, which increase the usability of this website, serve for direct advertising or simplify interaction with other websites and social networks, will only be used with your consent.
Decline Accept all Configure