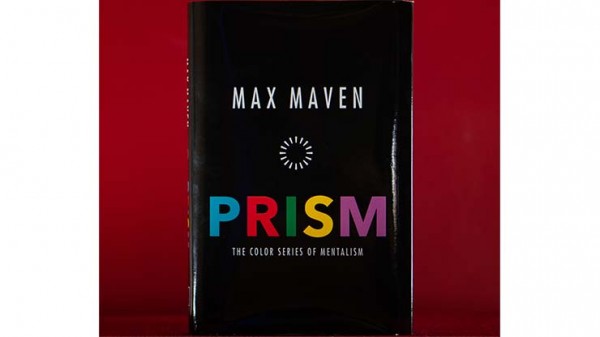 Description Evaluations 0
Description
While a sizable literature devoted to mentalism was produced in the past hundred years, little... more
Close menu
Product information "PRISM The Color Series of Mentalism by Max Maven | Zauberbuch"

While a sizable literature devoted to mentalism was produced in the past hundred years, little has stood the test of time. Among the scant amount that has is that of MAX MAVEN.

Writing under the name of Phil Goldstein, MAX MAVEN has created one of the largest, cleverest and most influential bodies of work in the field, stretching from the latter part of the twentieth century into the twenty-first. His star rose early, with the publication of five slim collections, each packed with innovative and performance-caliber mentalism. These booklets, which have become widely known as "The Color Series," contained items such as "Desire", "The Spirit is Willing (to Write)" and "Four-sided Triangle" - items that have become modern classics in the field.

MAVEN produced The Color Series booklets in small quantities and, despite ongoing popular request, refused to reprint them. They have become highly sought after, fetching prices in the hundreds of dollars. At last, after a quarter of a century, the entire Color Series is again available; all 53 effects, newly illustrated by Ton Onosaka, 240 pages in hardcover. Welcome to a classic reborn - PRISM!

We asked the top mentalists in the world if they wanted to say anything about it, and the response we got was overwhelming...

"When I was a teenager, and I had to do 10 shows in 2 weeks, these books saved my life. I can tell you off the top of my head, I performed Desire, Chaos, Nucleus, Four-sided Triangle, there was Mental Telepathy. So, it's a brilliant, brilliant book. I'm thrilled they're re-releasing this. I always say, when I see Max, 'Thank you for putting out these books, because they really did save my life.' If you haven't read these, you've got a treat. Get it while you can."
- Steve Valentine

"This is a must-have and read, and you should read it twice... at least! I've done so myself. What a treat to get Max Maven's entire collection of his The Color Series of Mentalism between two book covers. Only his 'Desire' and his 'Four-Sided Triangle' are worth so much more than you pay for the entire book. And there are so many other gems in it. Get it!"
- Jan Forster

"Max Maven is one of the most respected and prolific creators in mentalism. PRISM is one of his most important and respected works. Read it, absorb it, and study anything Max writes. It will make you a better mentalist."
- Uri Geller

"There's only one man -- ONE MAN ONLY -- who has influenced my mentalism career to the highest point. That man is Max Maven. Max has been my teacher, my rabbi, my sensei, the author I read the most, the one in my inner mind I think, 'How would Max do this?'"
- Marc Salem

"Max Maven's contributions to magic and mentalism cannot be understated. So much of what we see today and think of as 'revolutionary' was explored years ago, and many of those ideas can be found in the pages of his original color series, reprinted here. In the pages of PRISM you will find novel plots, ingenious methods, and numerous opportunities for inspiration. Whether you are looking for practical performance material, or to expand your foundational knowledge as a mentalist, PRISM is a must for your library."
- Brad Henderson

"If I have to explain why Max Maven's work is such an important contribution to our art, then you haven't read it. PRISM belongs on your bookshelf and deserves to be studied."
- Patrick Redford

"PRISM is so stuffed with great routines and invigorating ideas, it is one of those mentalist classics, like Corinda or Annemann, to be savored and revisited. Some of the effects, like Four Sided Triangle, have had a huge influence on modern mentalism. While pro's already know how valuable PRISM is, I've heard it said that it's not a good book for beginners, because Max assumes the reader knows some of the basics of the craft. But in this age when such things can be found readily on the Internet, this can be a perfect book for new mind-readers, teaching them how to create powerful presentations extremely efficiently, which is one of the most valuable things they can learn. I can't recommend this highly enough!"
- Chris Philpott

"Max Maven's PRISM is more than just a colorful collection of modern mentalism by one of the art's greatest thinkers and performers; it is a lens through which one may glimpse the secrets to constructing powerful, meaningful mysteries. Read the opening effect, Desire, and you will be changed forever. And then -- once you've basked in its brilliance -- you'll suddenly realize there are over 200 pages of illumination to go."
- Jared Kopf

"I have made my living as a performing mentalist for more than 50 years. There have been three go-to publications: The Jinx, Thirteen Steps, and Max Maven's Color Series (now published as PRISM). Virtually every effect in PRISM is complete, still contemporary, and truly performable. The initial effect, DESIRE, sets a precedent for excellence that continues through the entire book. A must have."
- Ross Johnson

"I wanted these for years. Everybody told me the best mentalism available was in Max Maven's Color Series. But when I tried to compile it, they were on eBay for 3-4 HUNDRED dollars EACH. I have a several thousand dollar set of the Color Series. Now, he has it out all in one place."
- Paul Draper