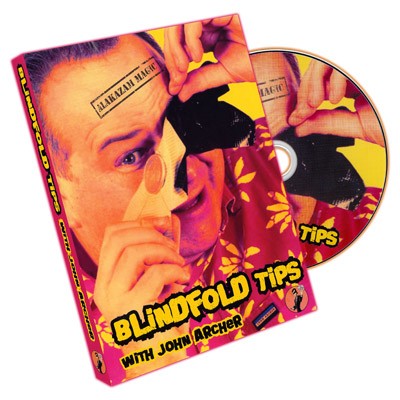 Description Evaluations 0
Description
by  John Archer What can I say about John that you don't already know? John is one... more
Close menu
Product information "Blindfold Tips by John Archer"

by John ArcherWhat can I say about John that you don't already know? John is one of the funniest entertainers I have ever seen! His comedy is funny and his magic is strong. What more could you possibly want from a performer?The ultimate, most comprehensive guide to one of mentalism's most versatile routines. John Archer has performed this routine all over the world and it has become one of his signature pieces. Imagine being anywhere in the world, grabbing a couple of coins, some gaffer tape, a blindfold, pen and paper from the local store and being able to perform a hilarious twenty minute, mind-blowing routine!Now for the first time, John goes in-depth to explain all the secrets and nuances that have made this one of his most requested effects. This is not just a quick trick, it is an entire act that builds and builds into a standing ovation finale. This is the real work on the blindfold routine and it will open up a world of possibilities. Shot in front of a live audience, you will experience John at his very best, performing the routine, and then he goes into every little detail with you, in an informal discussion-style explanation, which is equally entertaining."Those who think that comedy and mentalism can't be weaved together have not seen John Archer perform. John's comedy is brilliant, fresh and fast, yet it takes absolutely nothing away from the serious mystery of what it is he is performing. In fact quite often the comedy (take his blindfold routine for example) adds to the impossibility of the demonstration. John is a must see for those who are looking for their own character and what the limitations are not."
- Banachek
"John Archer is as brilliant as he is funny, a true pro in every sense of the word. You will not be disappointed that you have purchased this DVD. I for one listen very hard whenever John talks. He knows his stuff and more importantly he knows what makes a routine and an audience work. Sit back, laugh and enjoy being taught by a master"
- Luke Jermay Running Time Approximately 1hr 21min

Related links to "Blindfold Tips by John Archer"
Evaluations 0
Read, write and discuss reviews... more
Close menu
Customer evaluation for "Blindfold Tips by John Archer"
Write an evaluation
Evaluations will be activated after verification.
Customers also bought Customers also viewed
Customers also bought
Customers also viewed
Viewed
This website uses cookies, which are necessary for the technical operation of the website and are always set. Other cookies, which increase the usability of this website, serve for direct advertising or simplify interaction with other websites and social networks, will only be used with your consent.
Decline Accept all Configure