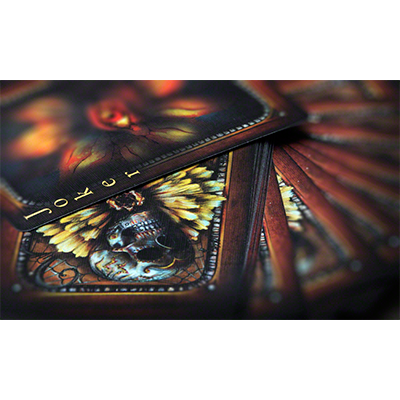 Bicycle Day of The Dead by Collectable Playing Cards

Day of the Dead (Spanish: D?a de Muertos) is a Mexican holiday observed throughout Mexico and around the world in other cultures. The holiday focuses on gatherings of family and friends to pray for and remember friends and family members who have died. It is particularly celebrated in Mexico where the day is a bank holiday. The celebration takes place on October 31, November 1 and November 2, in connection with the triduum of Hallowtide: All Hallows' Eve, Hallowmas, and All Souls' Day. Traditions connected with the holiday include building private altars called ofrendas, honoring the deceased using sugar skulls, marigolds, and the favorite foods and beverages of the departed, and visiting graves with these as gifts. They also leave possessions of the deceased.

Scholars trace the origins of the modern Mexican holiday to indigenous observances dating back hundreds of years and to an Aztec festival dedicated to the goddess Mictecacihuatl. The holiday has spread throughout the world. In Brazil Dia de Finados is a public holiday that many Brazilians celebrate by visiting cemeteries and churches. In Spain there are festivals and parades and, at the end of the day, people gather at cemeteries and pray for their dead loved ones. Similar observances occur elsewhere in Europe, and similarly themed celebrations appear in many Asian and African cultures.

Each court card hand painted before being transferred digitally to a computer. It took 12 months to complete this detailed deck of playing cards.

Our design features 14 original cards including 12 court cards, back card and a joker each hand painted on canvas over the past 12 months. Once the paintings were completed the paintings were transferred digitally to a computer for the printing process.

Printed by USPCC on their classic Air-Cushion Finish